A Guide To Retro Jewellery

Retro jewellery, also known as cocktail jewellery, is a term encompassing the jewellery created in the period between the late 1930s and the 1940s.

The Second World War affected everything, and even fashion wasn’t left untouched; millions of lives were lost, and resources globally were depleted. Because of this, there dawned a new era in fashion that demanded bolder statements and more practicality. And thus, retro jewellery pieces were born.

Why did jewellery change?

After WWII, women had gained a new, stronger position in society. Once again, they fulfilled roles traditionally performed by men before they were sent to war. The fashion of the era reflected these changes: the loose frivolity of the Art Deco era was replaced by tailored clothing with strong structures.

The clothing itself was both modest and practical, but ultra-feminine too with cinched hourglass silhouettes. These heavier and more striking styles in fashion required stronger, bolder jewellery to match.

Additionally, by the 1940s most mainstream magazines were widely available in colour print. Therefore, advertisements and style advice became obsessed with every colour under the sun, and the fun styles of women’s jewellery began to jump right off the page.

Expensive materials like gold and precious gemstones were in short supply. There were also few jewellery designers still working because of the war efforts. Therefore, eyes turned to synthetic gemstones and semi-precious stones.

The jewellery of this era was large and ostentation, with the cocktail ring in particular gaining in popularity. Stones like citrine, amethyst, aquamarine, peridot, tourmaline and topaz were used frequently. Diamonds, rubies and sapphires were still used in many circumstances, but they were often used in pave pieces to make the most of what was available.

Platinum was redirected to the war effort, and was substituted by palladium in jewellery pieces.

Gold was very much the metal of the era, but it had to be used sparingly as supply was limited. Additionally, no one had enough money to buy pieces made from solid gold. Styles like thick chains made the most out of gold, giving jewellery a chunky appearance despite the fact that it didn’t require much of the metal to make it.

As you can imagine, many retro jewellery motifs were patriotic and used national colours and symbols. ‘Good luck’ swallows in particular were very popular.

Famously, Cartier designed their ‘Bird in a Cage’ and placed it in the window of their Rue de la Paix shop window, as a subtle gesture of defiance to the occupying German forces. To celebrate France’s liberation, Cartier redesigned this piece to depict a ‘Bird at the Door of Its Cage’.

Other designers like Boucheron created figure brooches in regional costumes, and Mellerio made brooches depicting soldiers, weapons and armoured cars. Common shapes such as bows, animals and flowers reigned supreme in the realm of motifs.

People became obsessed with multifunctionality in this era, and convertible jewellery became popular. This encompassed things like necklaces that could turn into a bracelet with matching earrings, or the versatile clip brooch. This brooch could be worn as a brooch, two brooches, or could be attached onto things like bracelets and necklaces.

In the 1940s, another big influence on jewellery was movement. Clever new effects such as trembling petals and vibrating butterfly wings brought bejewelled creations to life.

Rings were big, bold and chunky. Bombe or boule rings were paved with small colourful gemstones.

Huge citrines and aquamarines were fashionable, as seen in this colossal 16.92 carat aquamarine ring. 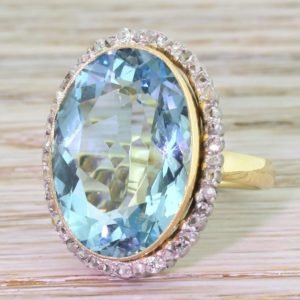 Brightly coloured gemstones were all the rage, as seen in this large opal ring. 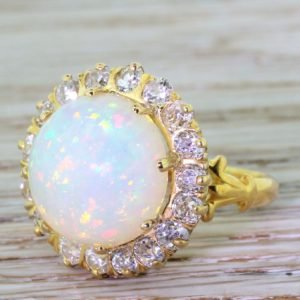 Cocktail rings, such as this  emerald one, or this green tourmaline ring, were popular too. 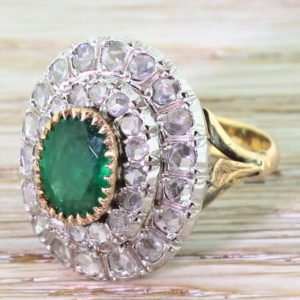 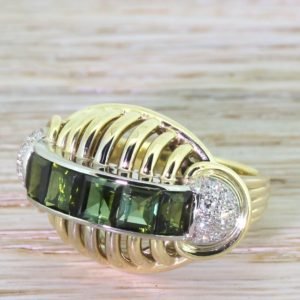 Again, these were bulkier than those seen in previous years. They were often worn at the base of the neck as opposed to on longer chains.

These were bold and clunky, generally fashioned from gold into chains, cuffs, and charm bracelets. They were also dotted with gemstones and adorned with charms and old stick pins.

Brooches were often designed using the techniques and motifs of the era. Fabric motifs like bows, ribbons and lace were popular, created with gold and set with coloured gemstones.

Realistic animals and flowers were brought to life through movement and colour. Figurine brooches, such as the Van Cleef & Arpels ballerina brooch, were extremely popular right through to the 1950s.

These were often adorned with bright gemstones and worn clipped and close to the ear. Large individual gemstones were popular, as were drop earrings with ornate styles like these diamond pieces. 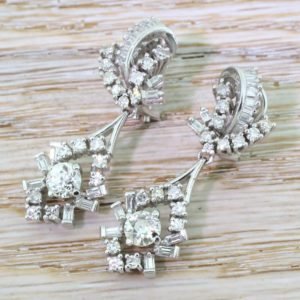 They came in a myriad of designs to echo the trends of the era, such as these jade earrings that somewhat resemble dragonflies. 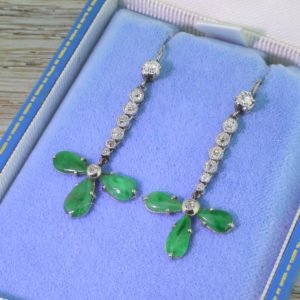