Whichever fashion movement you subscribed to in the 1970s, or whatever 1970s trends you find yourself drawn to now, there’s no denying that the clothes and accessories of one of the most fashionable eras in history were bold and flamboyant, to say the least.

Diving deeper into the clothes, jewellery, and ideas of the 70s, it becomes clear that there are far too many converging and overlapping movements and subcultures, influencing and giving rise to one another during that time, to explore in a single article.

So instead, we’ll be focusing on what we think are the two most iconic fashion movements of the 1970s – the chic carefree hippies and the aesthetic bohemians. Both of these subcultures made a lasting impression on the fashion world of today, and their styles are reflected in some antique jewellery.

Fashion designers like Thea Porter rescued the overly nomadic hippie style more commonly associated with the dress sense of that time, by remaking items such as the gypsy dress and high neck blouse with billowing silk, psychedelic prints and bold floral embroidery.

1970s jewellery, especially the kind that was made with the chic hippie in mind, was designed and made in the same spirit. Items were bold and boldly feminine, with men and women wearing an array of colours and styles across the board.

A piece of jewellery that we found to be particularly striking is this sunshine ring, which brings all these elements into play in one piece. 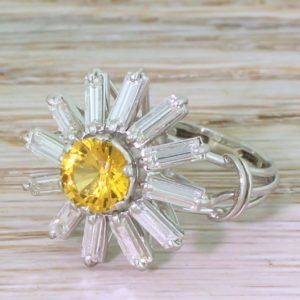 Statement jewellery was a major trend at the time, with large attention-grabbing rings and necklaces taking centre stage. This period also took advantage of coloured diamonds and other naturally coloured gemstones, such as with this yellow sapphire ring and this regal amethyst solitaire ring. 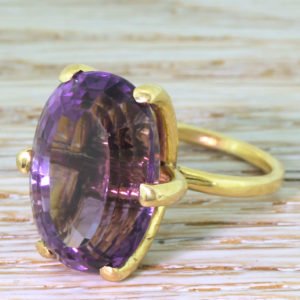 The Bohemians, who were known for their unconventional lifestyles, took an even bolder approach to their fashion and jewellery choices than the hippies, as demonstrated in the 1970s aesthetic avant-garde movement.

Avant-garde clothing choices which included items such as tunics, culottes, kaftans and robes were also complimented by large pieces of bold jewellery.

Avant-garde bohemian jewellery is characterised by its unusual design and fashion-forwardness. Convention was thrown out of the window in favour of expression, shown best in this yellow sapphire and emerald ring. 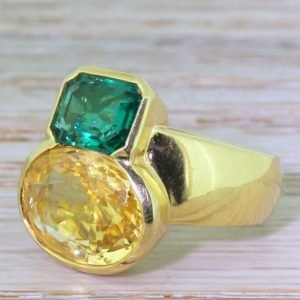 Much of the jewellery designed in the spirit of the bohemian’s avant-garde outlook still looks ahead of its time. One example is this very distinctive ruby, sapphire and diamond crossover ring. Boundaries were pushed in terms of both design and colour combinations, leading to unique pieces that really reflect the individuality that was so important in the bohemian scene. 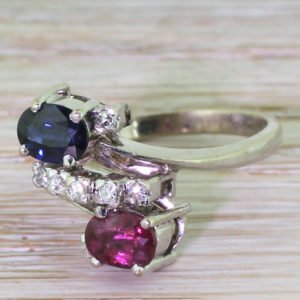