Famed for his witty, flamboyant designs and celebrity clientele, Paul Edmund Flato is an institution in the jewellery world. At his peak, Flato’s opulent and whimsical Art Deco jewellery pieces were adorned by some of Hollywood’s most glamorous leading ladies, from Katharine Hepburn to Greta
Garbo.

His glittering career was later tarnished, though, when Flato became embroiled in a fraudulent plot to pawn a hundred thousand dollars worth of jewels entrusted to him by his colleagues and clients. Our latest Spotlight On post illuminates the life and career of one of America’s most important and enigmatic jewellers, Paul Flato.

Born to a prominent Texas cattleman and German mother at the turn of the century (1900), Flato’s early years were spent in a town founded by his German great-grandparents, who had bought a sizable plot of Mexican land. By the age of 10, Flato had developed a keen interest in jewellery, parked by his observations of gypsies selling silverware as they passed through town.

He attended the University of Texas before heading to New York to study medicine. Despite his father’s early financial success, the roaring twenties marked a downturn for the Flato family. Paul still moved to New York but became a watch salesman instead.

Following his stint as a salesman, Flato opened his first jewellery boutique at One East 57th Street, Manhattan. Years later, Tiffany & Co. opened the doors to its flagship store directly opposite. Flato’s stock rose rapidly in early twenties Manhattan; before long, he was considered one of New York’s best jewellers, sharing the same tier as the leading European jewellers of the time.

Flato’s effervescence and networking prowess saw him open a second store on the West Coast in 1937, on Sunset Boulevard, Beverly Hills. This made Flato’s influence ubiquitous while strengthening his ties with celebrity clientele.

Naturally adapting to the Hollywood lifestyle, Flato gained five non-appearing film credits, as well as a fitting on-screen role as a jeweller in Hired Wife (1940). The marriage of charisma with unprecedented yet distinctive Art Deco designs earned Flato his famous ‘jeweller to the stars’ moniker.

Flato’s rise to prominence saw him adopt a top-down approach to jewellery creation. By his own admission, he couldn’t draw a line, but he knew people who could. Flato employed three master craftsmen – George W. Headly, Adolphe Klety and Fulco di Verdura – to sketch their creations before moulding them into his signature aesthetic.

This formidable trio produced stunning jewels that were fabulous in scale yet delicately whimsical and utterly beguiling. Most notably, their pieces contrasted the flat jewels made popular by the great jewellery houses of Place Vendome and Fifth Avenue.

Flato’s most iconic pieces feature platinum and flowing shapes, such as ribbons, flowers and scrolls. In the film Holiday (1938), starring Katharine Hepburn and Cary Grant, Hepburn wore a stunning three-strand diamond necklace by Flato at the request of the film’s director.

Although we don’t stock any vintage Paul Flato pieces, some of our collections effectively capture the same aesthetic. This stunning diamond dress ring showcases Flato’s whimsical swirls and features a round brilliant cut diamond. 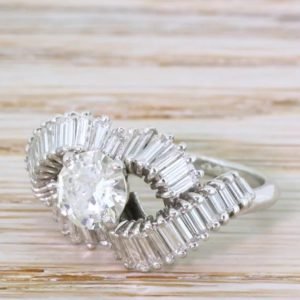 In 2004, the American Folk-Art Museum curated an exhibition, ‘Masterpieces of American Jewellery’, which featured seven Flato pieces. A compendium released by Judith Price with the same name featured a pair of Flato’s solid gold cufflinks on the cover.

In 1943, Flato was convicted of fraudulently pawning one hundred thousand dollars worth of jewels entrusted to him by clients and colleagues, which resulted in a 16-month prison sentence. Upon his 1945 release, Flato moved to Mexico City where he resided until 1953. These years were turbulent and saw Flato fighting extradition to the US, where faced additional charges of larceny and forgery.

He returned to Mexico City in 1970, opening a jewellery store in the eclectic Zona Rosa district, which he operated in relative anonymity until the early 90s, before returning to Texas in his twilight years.

Since his death, Flato’s jewellery regularly attracts massive interest at auction, with pieces being sold for hundreds of thousands of dollars at top auction houses. His obituary, which recognised him as ‘the first of the major American jewellers to do highly imaginative work on a par with European jewellers’ was included in The New York Times.

⟵ The Significance of Birthstones: June and Pearl
Back to the blog
What is Victorian Mourning Jewellery? ⟶