Gypsy rings were incredibly popular during the late Victorian era, particularly between 1885 and 1900. This was an aesthetic period in jewellery design, and jewellers favoured diamonds and bright gemstones: sapphires, tourmaline and emerald were especially popular.

Initially favoured by men because of their robust structure, gypsy rings later became widely worn by women due to their timeless elegance.

The term gypsy ring refers to the setting of the stone: mounted flush with the metal. It was also common for symbols like crescent moons and stars to be carved into gipsy rings, adding femininity to what might otherwise be seen as a more masculine setting.

A ring’s setting refers to the metal surround that holds the diamond or gemstone. Each setting style is crafted to enhance the stone’s beauty.

In a gypsy setting, the gemstone will appear to sit flush with the surrounding metal. Similar to a bezel setting where only the diamond’s crown is exposed, the gypsy setting will also protect the gemstone from everyday wear or accidental damage.

However, in a bezel setting, a protruding metal rim wraps around the gemstone whereas in a gypsy setting the stone is sunk into the metal and sits just below the surface of the surrounding band. Because of this, the gypsy setting is one of the most secure styles, making them perfect for those who have an active lifestyle.

Softer stones are largely unsuitable for the gypsy setting as they are susceptible to damage during the setting process.

When utilising a gypsy setting, a jeweller will set a precious gemstone into the centre of a domed gold band. These bands are sometimes plain but will often be engraved with subtle designs.

Simple and easy to wear ring, with an abundance of gemstones to choose from, gypsy rings have a timeless, androgynous quality that will keep them in fashion for years. This makes them a favourite for people seeking an attractive yet robust ring style.

This Victorian green sapphire gypsy ring is a great example of the gypsy style. 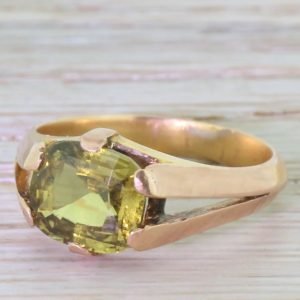 Although gypsy rings were traditionally given to commemorate friendship, or as a gift to a young girl, they were also given as gifts from husbands and lovers. While uncommon as an engagement, they do make a wonderfully unique and timeless alternative.