A Brief History of Earrings

Worn by women and men for millennia, earrings effortlessly display the dispersion and brilliance of coloured gemstones. But how did we arrive at the point where people were compelled to pierce their ears?

This article chronicles the history of earrings, covering their myriad styles, Bronze Age roots, and continued evolution. If you’re interested in antique earrings and how the styles evolved, you’re in the right place.

We begin our journey 5,000 years ago, with Europe’s oldest know preserved human – a man named Ötzi, who was frozen in the Alps between circa 3300 BC and September 1991. While his perfect preservation allowed archaeologists to speculate about our ancestors’ lives, they made another remarkable discovery – Ötzi’s ears were pierced with large holes, suggesting he’d worn heavy earrings for much of his life. This revelation placed the earliest known evidence of humans wearing earrings one thousand years earlier than first thought.

While Ötzi was perhaps the earliest known earring wearer, he wasn’t alone in his penchant for adorned lobes. Archaeological discoveries have since shown that hoop earrings enjoyed immense popularity in Asia and the Middle East as long as 4,000 years ago. Moreover, the Ancient Persians left behind carved images of soldiers wearing earrings, as they often wore them as talismans to protect themselves in battle. 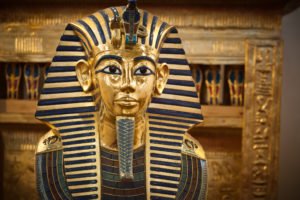 First worn by pharaohs before spreading throughout society, the Ancient Egyptians wore lavish, decorative earrings made of gold and vibrant gemstones like lapis lazuli and turquoise from around 1650 BC.

When Tutankhamun’s tomb was unsealed in 1923, the mummified pharaoh was found with pierced ears, with earrings scattered in the tomb. Much later, Cleopatra owned a pair of Pearl earrings, one of which she is said to have dissolved in vinegar to impress the Roman general Mark Antony. Astonishingly, the extreme rarity of pearls at the time would have meant that the destroyed jewel was worth at least £3 million.

From the Buddha to Julius Caesar

For much of their history, earrings indicated status and wealth. Images of the Buddha, for example, frequently depict him with long earlobes but no earrings, suggesting he once wore heavy earrings but later renounced luxuries to further his spiritual journey.

In early Ancient Roman times, earrings were worn by men and women alike. They became prevalent during Julius Caesar’s reign, with the revered emperor occasionally donning a single earring. As the Roman Empire expanded; however, perceptions of earrings changed and gradually morphed from an androgynous accessory to a strictly feminine adornment. Around this time, earrings adopted their luxury status and began to shed their ritualistic and protective associations of old. As time went by, only high society members could afford to wear the gemstones and precious metals from which the earrings were now almost exclusively made.

Earrings in the Middle Ages

Earrings fell out of favour during the Middle Ages – although they weren’t completely abandoned – with necklaces, brooches, and lockets bucking the trend by gaining popularity. In any case, the period’s fashions, such as large hats, high collars, and extravagant hairstyles, covered the ears. In the 13th Century, the Church forbade ear piercing, leading to an uptick in earring wearing among rebellious thieves and the underclass.

A type of earring known as the girandole enjoyed immense popularity during the Georgian era – their distinct design featuring a single gem set near the earlobe with the other gemstones hanging below, resembling a chandelier.

The girandole’s ornate appearance was elevated by filigree metalwork and smaller accent gems, creating an intricate yet bold look. Their popularity soared as the day’s hairstyles favoured upswept looks that fully revealed the ears. Coloured gemstones such as ruby, sapphire, emerald, and garnet were also popular, but the discovery of diamonds and advances in mining technology saw the gem’s popularity begin its rapid ascent. 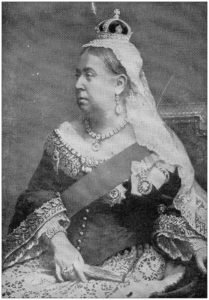 The dawn of the Victorian era saw earrings’ popularity decline as chic coiffures concealed the ears. There was, however, another resurgence circa 1860, when pendant-style drop earrings gained traction. Queen Victoria adorned herself with long earrings bejewelled with gemstones, setting fashion standards for those who idolised her across Britain and Europe. Akin to the preceding era, diamonds’ popularity continued to rise courtesy of refined cutting techniques.

The Art Nouveau and Art Deco movements influenced the period’s jewellery – the juxtaposed angular and organic styles appealing to vast swathes of fashion-conscious socialites. The roaring twenties saw longer drop-style earrings soar in popularity before shorter designs worn close to the earlobe remerged in the 1930s. Bold looks and block colours were in vogue, with customers clamouring for gemstones such as lapis lazuli, onyx, jet.

By mid-century, traditional ear piercing returned to prominence, helped in part by Queen Elizabeth II. The influential queen had her ears pierced to wear her wedding diamond earrings, bringing the practice back into the public consciousness.

The 1960s fashion explosion made earrings one of the decade’s must-have accessories—ostentatious designs paired alongside straight hairstyles and dress designs were all the rage. But it wasn’t until the 1970s that modern ear-piercing practices became widely available on the high street – before then, it was the business of doctors, medical establishments, or risky at-home procedures. The seventies ushered in a more delicate look along with earlobe alternatives and multiple piercings in the same ear.

After three centuries on fashion’s fringes, the 1980s sparked a remarkable men’s earring revival, typified by large hoops, bold colours, and chunky styles. This trend shift coincided with the increased availability of costume jewellery, which made earrings affordable for all.

Earrings in the new millennium

Surprisingly, the new millennium didn’t propel any new styles to the forefront, with jewellers choosing to update classic styles and keep things relatively simple. Recently, however, designers returned to gemstone-encrusted earrings rather than fake stones or plain metalwork.