An antique toi et moi ring will show two stones of a similar size and cut mounted together, whilst vintage or newer styles are more likely to juxtapose materials and gems. Any two stone ring with two similar sized stones set alongside each other can be called a toi et moi ring, although traditionally, the stones would be tightly close and held together with an interwoven band.

What is the history of the toi et moi ring?

The toi et moi ring was most popular during the Edwardian and Belle Epoque periods – times that are well known for their romanticism. Not only is the setting of the gems important, as their closeness symbolises balance and equality, but the two stones are important too.

Diamonds are traditionally worn on engagement rings, and are popular in toi et moi rings, but other stones such as sapphires, emeralds or even pearls often make up the other precious stone on the toi et moi ring.

Napoleon Bonaparte proposed to Josephine de Beauharnais with a toi et moi ring in 1796, and they were married three weeks later. Their love story is well known to this day as Napoleon’s family did not approve the match – Jospehine was six years older than he, and was a widow with two children. The ring that tells the story of their romance is set with diamond and sapphire pear cut stones set in gold. It sold for £660,000 at auction in Paris – nearly fifty times the price that it was initially listed at.

John F. Kennedy also proposed to his future wife Jacqueline Onassis with a toi et moi ring in 1953 that consisted of a 2.84-carat emerald and a 2.88-carat diamond – both emerald cut. Originally, the two larger stones were surrounded by baguette cut diamonds on the arms of the ring, but Jacqueline Kennedy had the ring redesigned in 1961 to include marquise diamonds on the arms that created a laurel on the band.

The stones that adorned toi et moi rings were particularly important in expressing the sentiment behind a toi et moi engagement ring. It was thought that the meaning of two stones could work together to bring good luck to the couple.

In the Victorian times, toi et moi rings often included a ruby and a diamond – representing love, prosperity, passion and devotion. The combination of a diamond and a pearl was particularly common in the Edwardian period, as pearls were known to symbolise loyalty, prosperity and to strengthen relationships.

All sorts of stone combinations exist, from diamond and pearl to sapphire and emerald, providing endless opportunities to find the toi et moi ring that suits your relationship. 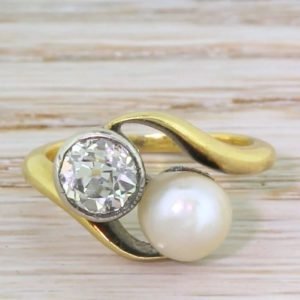 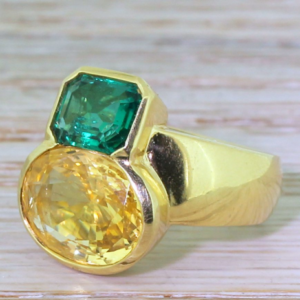