The Art Deco movement permeated every aspect of the culture and creativity of the 1920s.

Art Deco era jewellery is wholly indicative of the period’s extravagance and decadence. Whilst each jewellery designer had their own unique spin on the clean lines of Art Deco design, there was an overarching theme of clean, linear patterns and contrasting combinations of light and dark colours.

Throughout the later years of the Art Deco movement, creators also became influenced by a mix of cultures from around the world, with the discovery of the tomb of Tutankhamun in 1922 hosting a particular turning point. People worldwide wanted jewellery inspired by the riches found with the Pharaoh, and jewellery designers had to comply (as seen in this Egyptian revival ring, circa 1925). 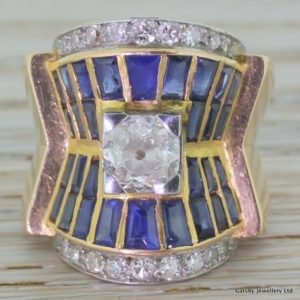 From these moments onward, Art Deco was an amalgamation of different motifs and iconic pieces of jewellery, inspired by art from Asia and Africa. There are certain pieces of jewellery that utterly define the Art Deco era, including the sautoir necklace and Cartier’s iconic Tutti Frutti collection.

Jewellery was arguably at its most innovative throughout the Art Deco period. The demand for large, elaborate bracelets meant that designers had to find a practical way to give people what they wanted in a wearable fashion. Thus, the flexible bracelet was born, often in a wide, chunky design with a multitude of diamonds and other jewels.

Chaumet and Cartier were pioneers of this design, crafting their bracelets with different diamond cuts. These flexible bracelets were adorned with marquises, baguettes, an early form of the emerald cut, rounds and half-circles, as seen in this diamond and sapphire bracelet.

They often lay flat against the wrist. But some also had extra details, such as buckle closures.

Whilst similar to the flexible bracelet, the cuff bracelet was another form of jewellery that became popular during the Art Deco movement. Cuff bracelets would often come as a pair, either matching or mismatching, and would often feature chunky rock crystals.

Perhaps the most famous cuff bracelets of this era were a pair of platinum and diamond cuffs crafted for starlet Gloria Swanson by Cartier.

These were mismatched cuffs, and she wore them in the film Sunset Boulevard, as well as in publicity stills for the film and to an Academy Awards party celebrating her Best Actress nomination. They became widely popular following Swanson’s appearances in them, and cuff bracelets have remained popular to this day.

Pioneered by Van Cleef & Arpels, mystery setting was featured on many different Art Deco jewellery pieces. This was a distinctive style, where small gemstones were closely set together in a mosaic pattern with no visible metal underneath, a technique exemplified in this sapphire and diamond ring. 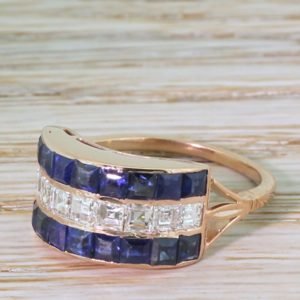 Bracelets and necklaces created with mystery setting had a simplistic feel to them, despite the effort required to make such intricate, rigid designs. They were often created from rubies and sapphires and hold testament to the craftsmanship and skill of designers.

This setting is used in a wide range of designs and has never gone out of style.

These are probably one of the most iconic pieces of jewellery that come to mind when you think of Art Deco.

Sautoir necklaces are long, all-white platinum, diamond and pearl necklaces that usually had geometric pendants at the end. Often, they featured a tassel of seed pearls and beads hanging from each end of the necklace or the middle.

These could be knotted effortlessly and worn down the front or back of a dress. They were particularly popular throughout the 1920s and took on the cross-cultural influences of China and Egypt across time.

The formerly white necklaces were injected with bursts of jade, coral, onyx and other boldly coloured gemstones. Longer necklaces have recently made a comeback, appearing on red carpets all over the world.

Whilst brooches are no longer a jewellery item of choice, they were very popular throughout the 20th century.

Raymond Templier and his early Cubist-inspired work produced beautiful brooches in this era. These were often crafted from diamonds, platinum and rock crystals, as with many other pieces of jewellery from the era.

Cartier, Bovin and Chaumet crafted multifunctional clips that could be worn as brooches, dress clips, or attached even to turban-style hats and shoes.

Cartier’s collection is indicative of the move away from black and white in the Art Deco era, where colour was back in vogue. The Tutti Frutti pieces were mosaic-style necklaces, bracelets and rings featuring fruit and foliage designs.

Imaginative combinations of gemstones were carved into leaves and flowers – such as in this tourmaline brooch, which isn’t a Tutti Frutti piece but uses a similar technique. 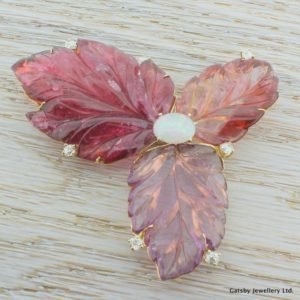 One of the more famous Tutti Frutti pieces is the Daisey Fellowes necklace, which was a commission by an American heiress. It features 146.90 carats of diamonds, two leaf-shaped sapphires weighing 50.80 and 42.25 carats, respectively, alongside a collection of emeralds and rubies.