Home / Blog / The Varieties of Topaz

The Varieties of Topaz

Topaz is a relatively common and fairly inexpensive gemstone that has several qualities making it perfect for use in jewellery.

Its earliest recorded use was in 1652 when it was referred to by Thomas Nicols as having a ‘pleasing sun-shine splendour’ in his book, A Lapidary. Its dazzling array of colours, warming spiritual properties and status as November’s birthstone have solidified its popularity as a gemstone ever since.

The name topaz likely comes from the original Greek name for what is now known as St John’s Island – Topazios – where a yellow stone was mined historically. However, gemmologists now think that the stone mined there was more likely a variety of olivine.

There are many varieties of topaz – some named, some not – coming in differing colours and features. Read on to uncover some key characteristics of the most well-known varieties of topaz, so you can choose which one is your favourite and learn how to identify it in antique or contemporary pieces of jewellery.

Topaz is a durable gem that sits at 8 on the Mohs scale of hardness, comparable to chrysoberyl, spinel, and aquamarine. It is most commonly found in a golden brown or yellow colour and is mined across countries like Brazil, Russia and Sri Lanka. 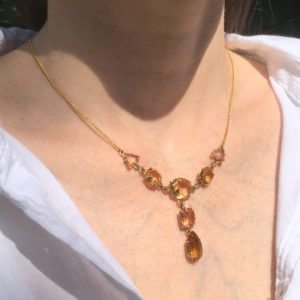 Topaz is used frequently in jewellery because of its hardness, range of attractive colours, relative abundance, and tendency to be found in large crystals which can be easily cut into big stones such as in this Victorian topaz necklace.

Topaz is a natural stone, but it can be put through a number of treatment processes to alter its colour and properties.

Named in honour of the Russian Imperial family, Imperial topaz is the rarest variety, coming in warm hues of peach, pink and orange. It is most commonly found in Minas Gerais in Brazil and the Ural Mountains of Russia. Laws were imposed by the Tsarinas of the Russian royal family barring non-royals from wearing or owning imperial topaz, cementing the stone’s exclusivity.

One of the most striking varieties of topaz, mystic topaz is coated with a thin layer of titanium creating a multi-coloured iridescent effect. Mystic topaz requires delicate care to maintain its colour, and abrasive cleaning products should be avoided.

The stone symbolises kindness and empathy, and it is believed to bear certain physical and spiritual healing properties.

Azotic topaz, like mystic topaz, is artificially colour enhanced. A thin film of metal is applied to its surfaces, giving it a similar iridescent variety of surface colours to mystic topaz. It differs from mystic topaz in its orangey-pink – as opposed to clear – base colour.

It was named after the company that developed the treating process to create its stunning finish. Azotic topaz jewellery is perfect for those with vivacious personalities and looks beautiful set against silver for contrast.

White topaz – or glacier topaz as it is sometimes known – can be as colourless as a diamond and is sometimes used as a cheaper alternative for an engagement ring. But because topaz isn’t as durable as diamond, it isn’t as well equipped for daily wear.

Natural blue topaz is extremely rare but can be made created by treating white topaz with small bursts of radiation. It looks stunning in gold jewellery, like in this mid-century topaz ring, where the brightness of the blue contrasts beautifully with rich yellow metal. 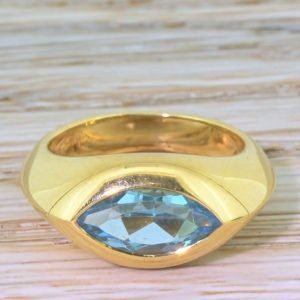